Last month I was given the chance to receive a Degustabox to review, and as a lover of food and surprises, how could I say no?  Degustabox is a monthly subscription box which contains between 10 and 15 surprise food items, some of which are new to the market.  Each box costs £12.99 including delivery, and there’s no obligation to keep your subscription. 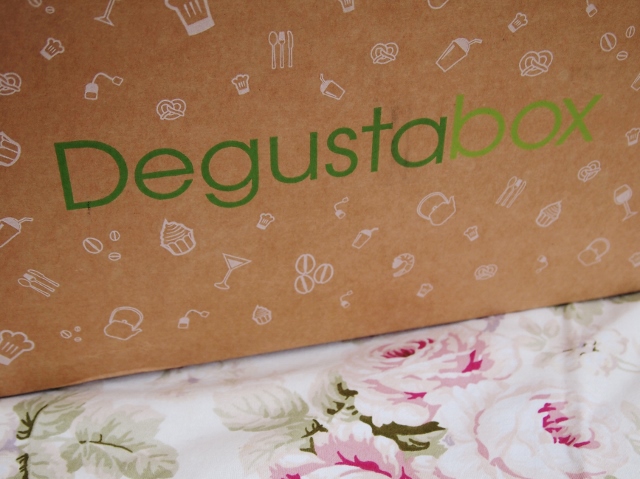 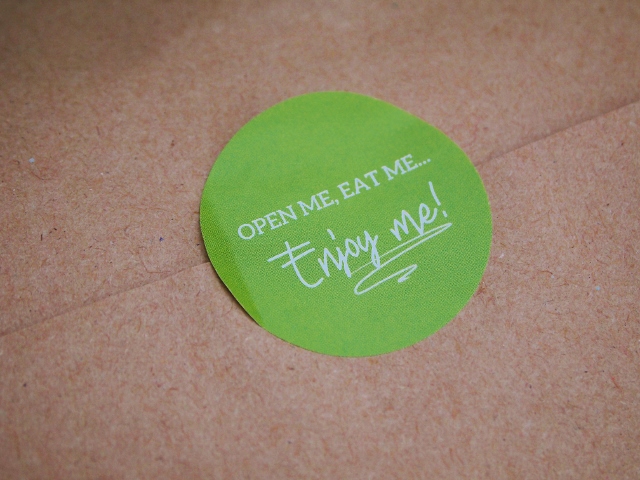 So, the March box.  My box was dispatched during the last week of March, and it arrived a couple of days later.  The service I received during the delivery process was really impressive, as I was sent a couple of texts and emails to say that my box was on its way and when it would be delivered, and when it did arrive the items inside were chilled, so you don’t have to worry about anything going off in transit. 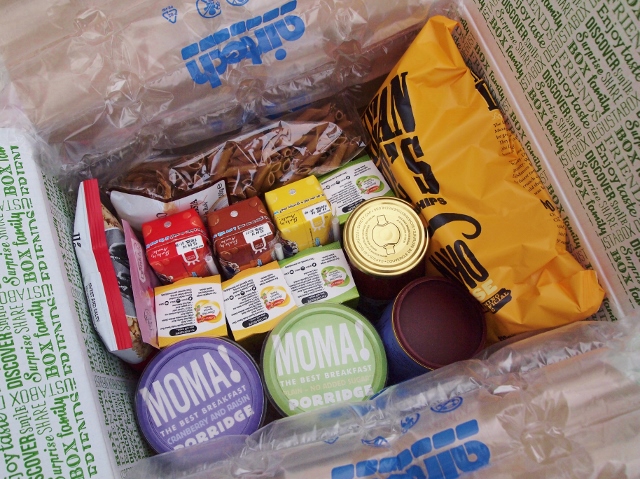 The box itself is really quite large, and comes packed full of items – I genuinely don’t think they could’ve squashed anything more in there!  In total, I received 15 individual items, none of which are particularly high-end, but pretty much all of them were new to me, which was exciting.

Here are my thoughts on each… 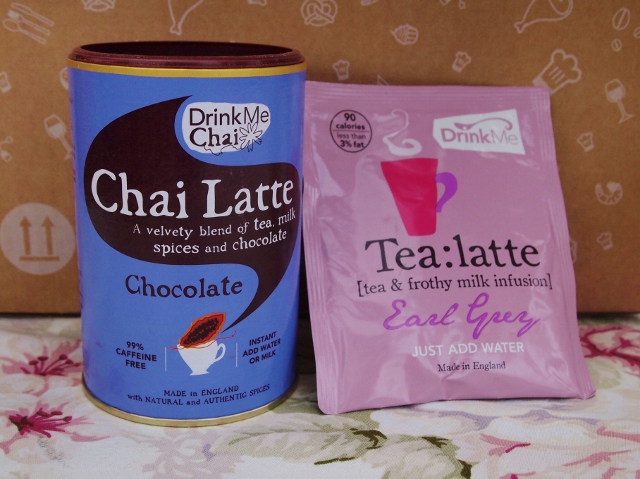 I was really excited to see these in the box as I already have Drink Me’s Spiced Chai Latte and it is gorgeous.  The Chocolate Chai Latte is better though, and is my favourite thing in the whole box.  The chocolate is dark and rich and slightly bitter, and the spices give it a hint of warming sweetness.  It actually tastes exactly like Lebkuchen which are my favourite Christmas treat, so this is a definite winner for me.

I haven’t yet tried the Earl Grey Latte so I can’t comment on its flavour, but I have high hopes.  Degustabox list these as being £6.50 for a multipack which seems quite expensive, but I checked online and they appear to be 32p per sachet in Sainsbury’s and Waitrose, which is pretty reasonable.

MOMA! Plain and Cranberry and Raisin Porridge (RRP £1.50 each) 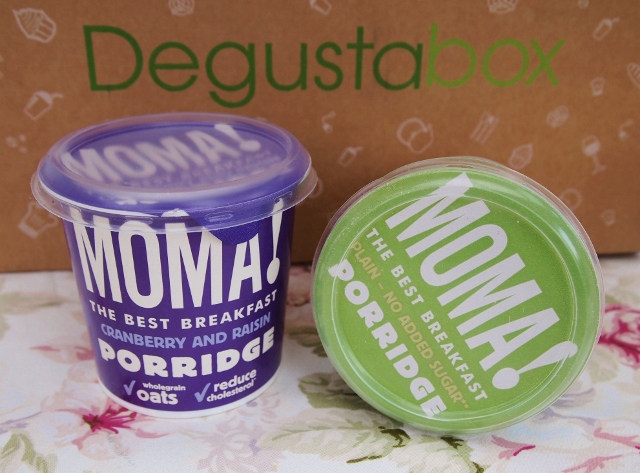 These didn’t excite me at first, especially as I’m not keen on porridge made with water, but they’re quite nice.  They’re easy to make too and perfect for a quick breakfast on the go – just mix with boiling water, replace the lid, leave for three minutes, and voila!  Instant brekkie.  The oats are mixed with milk powder so the texture is lovely and creamy, and the overall flavour is comfortingly sweet.  The cranberries and raisins in the purple pot add a warm burst of fruitiness too.  A thumbs up from me, but at £1.50 each I don’t think I’ll be eating them every day of the week. 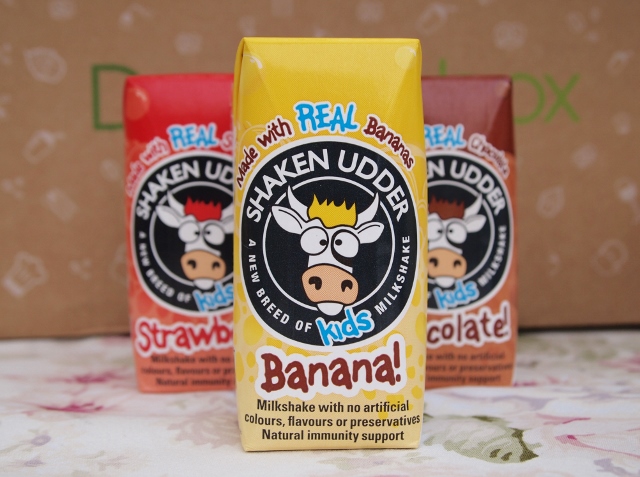 These little cartons of milkshake are perfect for kids.  The packaging is appealing, they come with a chunky straw and they’re just the right size for little hands.  I usually prefer thick and creamy milkshakes and these are quite thin in consistency, but they’re actually rather yummy.  I haven’t tried the banana one yet, but the other two have a really authentic flavour, probably due to the lack of anything artificial.  The chocolate one is my favourite so far.  These came with a couple of vouchers for a free pack of three, as well as a free ‘grown up’ bottle, so I’ll definitely be cashing those in. 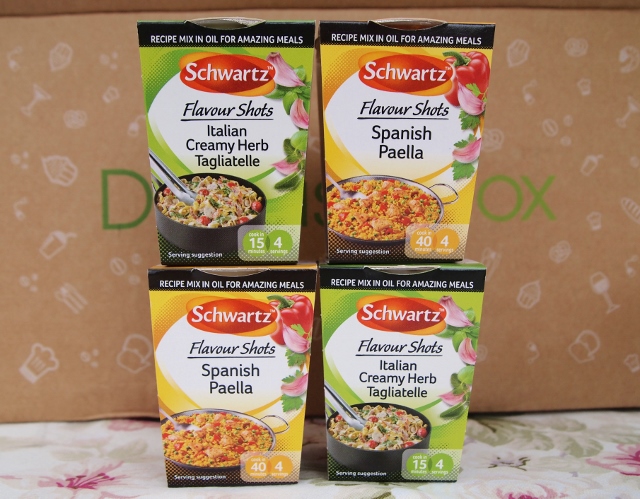 A new addition to the Schwartz family, these little pots contain a blend of herbs and spices mixed with oil, to make cooking tasty meals quick and easy.  I used the Italian Creamy Herb Tagliatelle shot earlier this week and it was so simple to use.  The packaging has a recipe printed on it, and all you have to do is fry chicken (I used Quorn) in the flavour shot before adding sliced mushrooms, cherry tomatoes, creme fraiche and rocket, and mixing with cooked tagliatelle.  The meal took about 15 minutes to make in total and was absolutely delicious.  I highly recommend these! 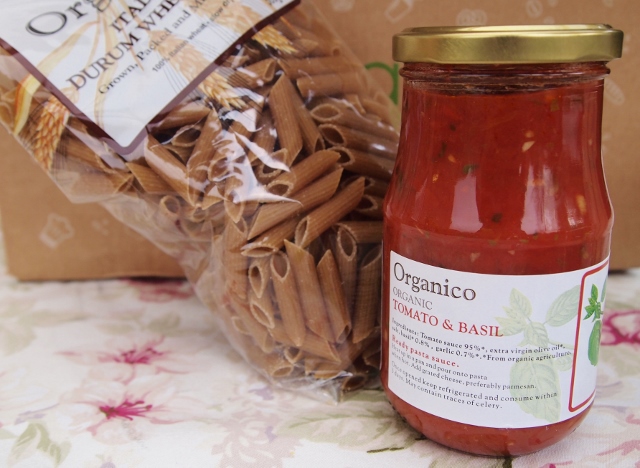 I’m yet to try these Organico products, but they’re both right up my street.  Organico source organic food made with sustainable, good quality ingredients, so there are no hidden nasties to be found.  I absolutely *love* brown pasta so I’m looking forward to using this, and the sauce looks fresh and beautiful.  These are on my meal list for next week! 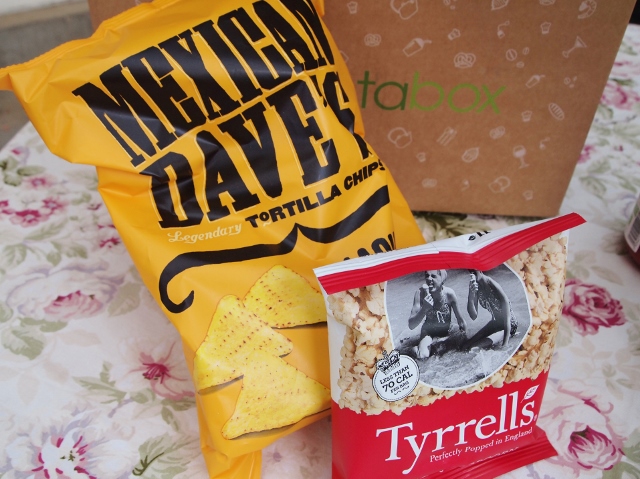 I’d never heard of Mexican Dave’s before, but after trying these tortilla chips I’ll definitely be looking for them again.  They’re not as nice as Doritos in my opinion, but the flavour and crunch are fantastic, and they make excellent nachos!  I had these last weekend baked with spicy salsa and cheese and they were scrumptious.  In fact, I’ll be having them again this evening!

Tyrrels’ popcorn is a satisfying combination of salty and sweet, which may sound odd but it’s amazing.  You get quite a lot of popcorn in the bag, but at less than 70 calories this popcorn is the perfect guilt-free treat.  I’d probably grab a bag as part of my lunch or as an afternoon snack.

My only quibble with the March Degustabox is that it’s a bit too savoury.  I have a sweet tooth and was hoping for some sweet treats to munch on, but the only sweet things in the box are drinks and porridge.  Oh well, maybe next month.  Other than that I’m really pleased with the box, and luckily for me everything in it is vegetarian, and all of it is yummy, so nothing will go to waste and everything will be enjoyed!  As a current saver I probably wouldn’t buy a box every month, but as an occasional treat when you fancy some food inspiration, £12.99 isn’t bad.  I definitely prefer Degustabox over the more costly yet smaller Flavourly box that I’ve tried once before.

If you want to know more about Degustabox and this month’s products, you can visit their website here.  You can also find them on Twitter and Facebook.

Will you be subscribing to Degustabox?

*This Degustabox was sent to me by Degustabox for review purposes.  All opinions expressed are honest and my own.*

This entry was posted by Naomi on April 6, 2014 at 4:55 pm, and is filed under Degustabox, Food. Follow any responses to this post through RSS 2.0. You can leave a response or trackback from your own site.