2
by Naomi in Degustabox, Food

February’s Degustabox was one of my favourites in a good few months, with a good mix of the types of things that I enjoy eating, and new brands that I hadn’t tried before, including Whole Earth, Laimon Fresh, and Lily O’Brien’s. 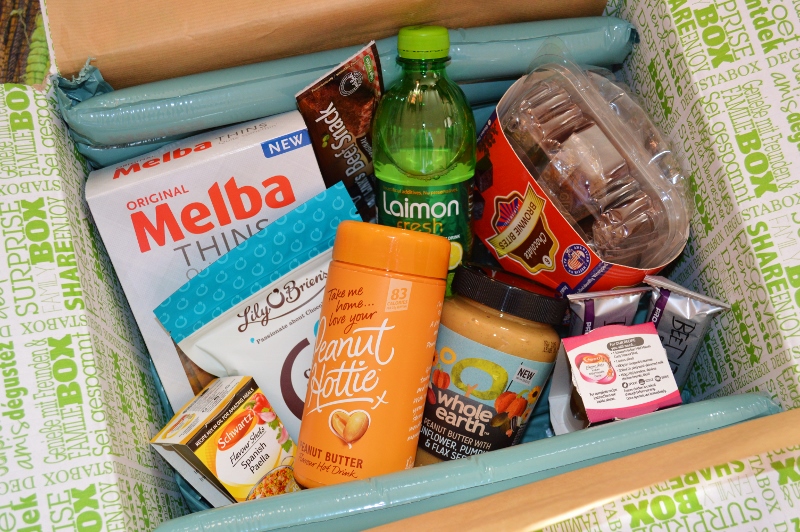 The box contained eleven individual items, with a total value of over £22.  Degustabox costs £12.99 each month, so this box saves you around £10, which is a pretty decent saving.

Also, this month I’ve decided to start rating each item of out 10, so you can get a better idea of which items stand out for me, and which don’t.  Here are my thoughts on each item… 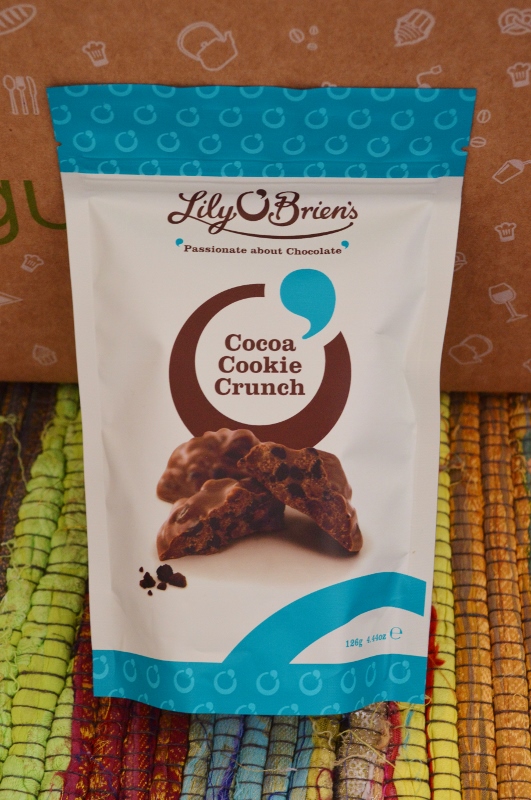 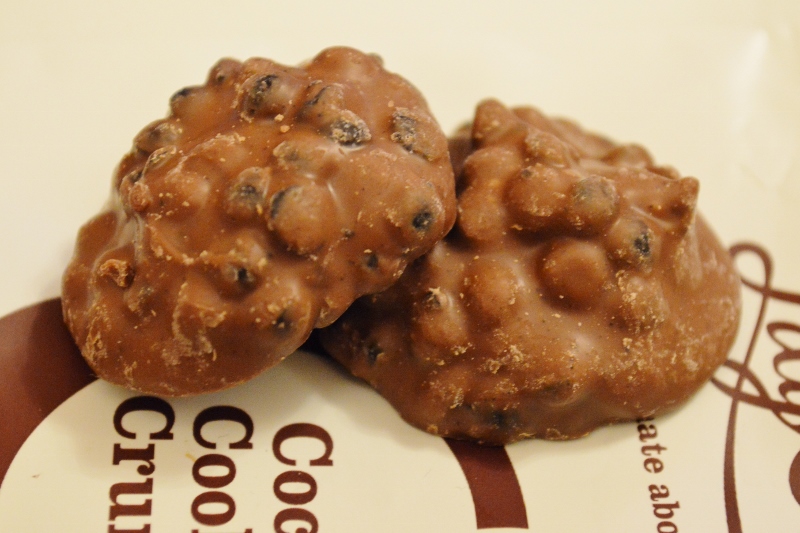 Lily O’Brien’s is said to be Ireland’s ‘best loved chocolatier’, and being a chocolate fiend myself, these were without a doubt my favourite thing in the box. The bag contains a generous amount of large individual chocolates, consisting of Oreo-like cookie pieces, coated in milk chocolate. The cookies have a fantastic crunch and a deep, rich cocoa flavour, offset perfectly by the sweetness of the milk chocolate. As you can imagine, the chocolates are very moreish, and it didn’t take Charles and I long to finish the bag. I’d definitely purchase these again! 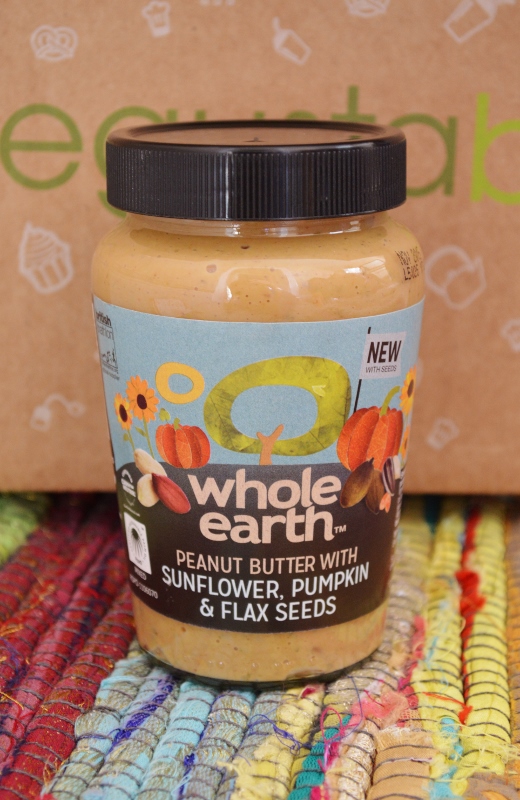 I adore peanut butter so this was another welcome addition to the box, especially as I’ve been eyeing up Whole Earth products in Morrisons for a while now. This particular peanut butter is new to the range, and contains a mix of sunflower, pumpkin and flax seeds, so is packed full of protein. The flavour is authentically nutty, as it isn’t overloaded with salt and sugar like some cheaper peanut butters are, and the seeds add a pleasant crunch and flavour. Perfect on wholemeal toast for breakfast! 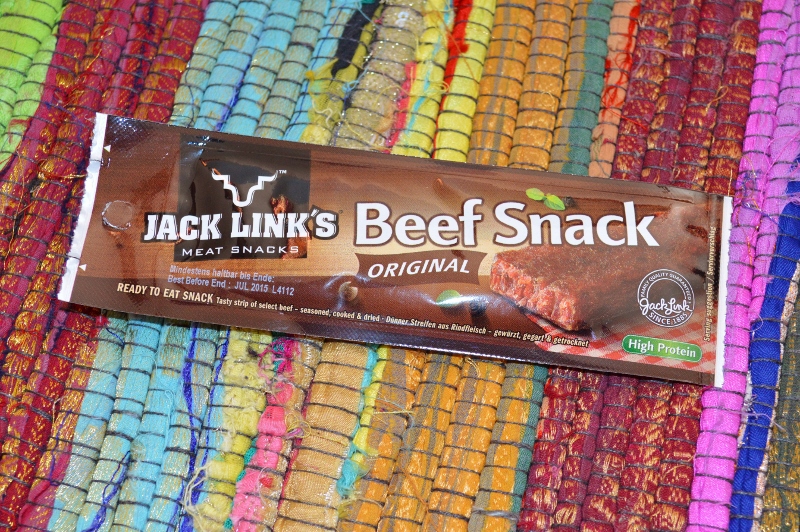 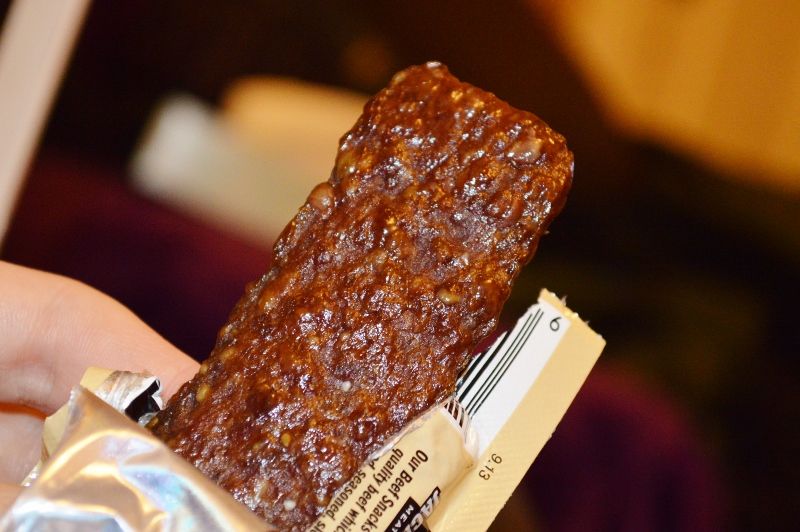 Jack Link’s Beef Snack is a beef jerky style bar, which aims to be a healthy, on the go snack. Being vegetarian, this one got passed straight to the fella for him to try. As soon as he opened it I was hit with the spicy scent of heavily seasoned meat, and it also looked very greasy. Almost sweaty! Apparently the flavour was a bit of a let-down. Despite the smell of spices, he said it tasted fairly bland, and was far too chewy. Not a winner, even by the meat-eater’s standards. 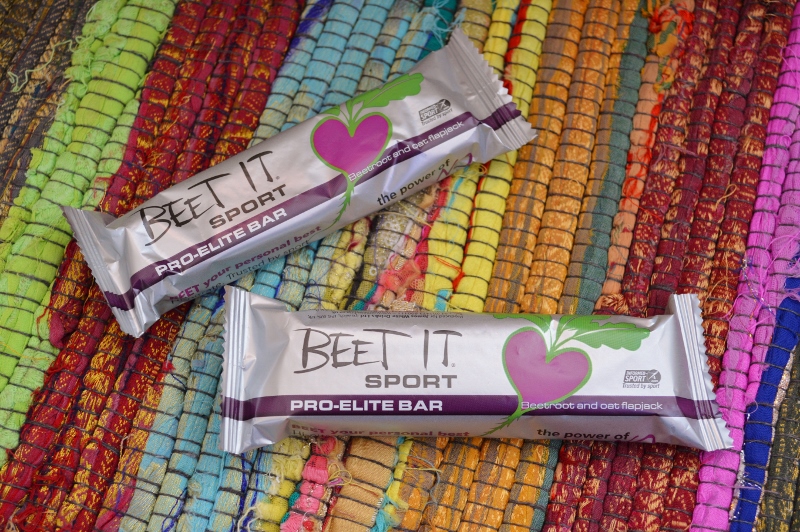 Beet It Sport’s Pro-Elite Bars are predominantly made of oats and beetroot, and contain a high level of dietary nitrate, which is apparently used by universities around the world for research in lowering blood pressure and improving sport performance.  I’m yet to try these and I want to save them for when I start running again (which will happen once Spring kicks in, honest!)  I’m not sure I’d pay £1.85 for a single bar, but I’m definitely intrigued to see what these taste like. 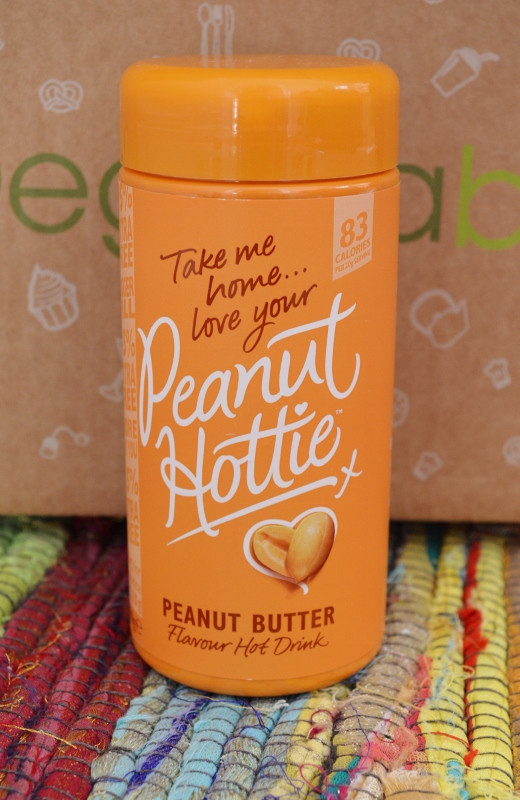 I tried Peanut Hottie fairly recently and enjoyed it, so was pleased to find this in the box.  Peanut Hottie is a peanut butter flavoured hot drink, and it’s exactly what it says on the tin.  It’s very easy to make, very much like a powdered hot chocolate, as you just need to add hot water.  When made up it looks like strong tea, but has a slightly salty, slighty sweet, nutty flavour, which is quite unusual for a drink.  I really like it, but a small mug is plenty enough, as it can get quite sickly. 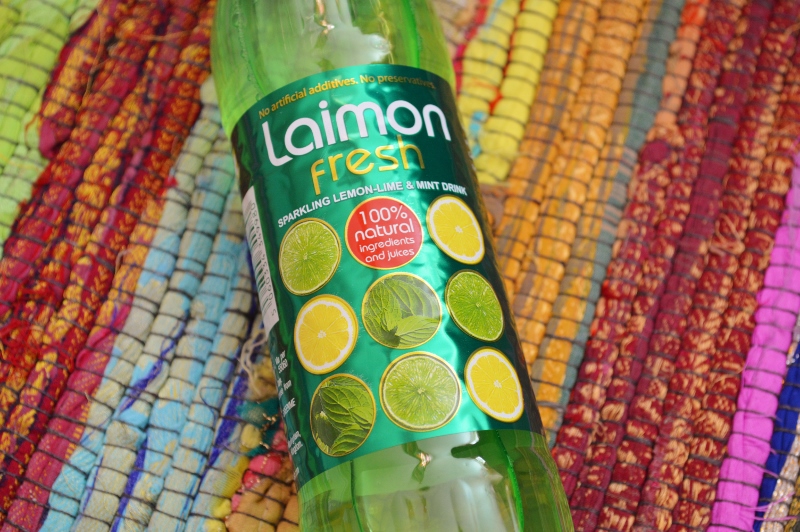 Despite having a name that sounds like washing up liquid, Laimon Fresh is honestly one of the nicest drinks I’ve tried in a long time. It contains a mix of natural ingredients, including fresh lemon and lime juices and mint, which combine to create something deliciously thirst quenching. The fruit juices are balanced perfectly – not too sweet and not too sour – but the star of the show is the authentic flavour of fresh mint. I drank this alone, but it would make a great base for a Mojito – something I’ll definitely be trying in the summer! 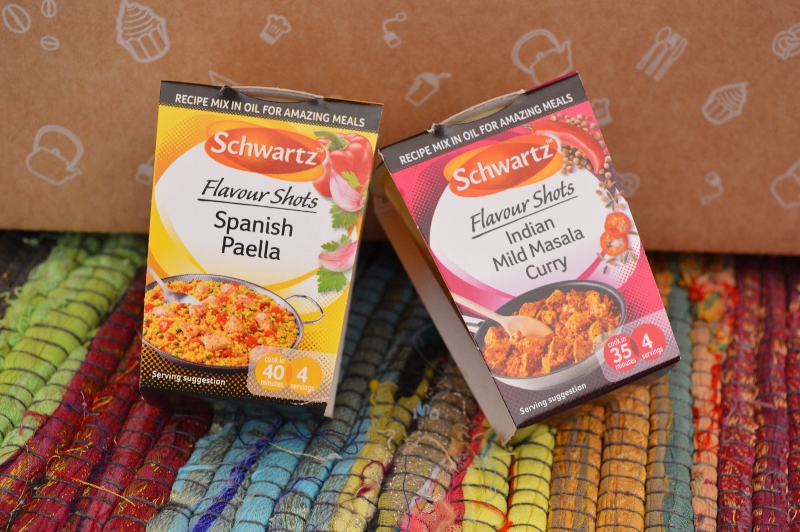 Schwartz Flavour Shots have appeared in a Degustabox before, and make for quick and easy delicious meals. Each shot contains a mix of herbs and spices, as well as sunflower oil, and are used to form the flavour base of a tasty dish.  The Masala shot has a fantastic blend of spices which are full of flavour, and not too hot. I used Quorn chicken in my curry, and combined the shot with chopped tomatoes and milk, as suggested on the packaging, and it tasted great. A big thumbs up from me. 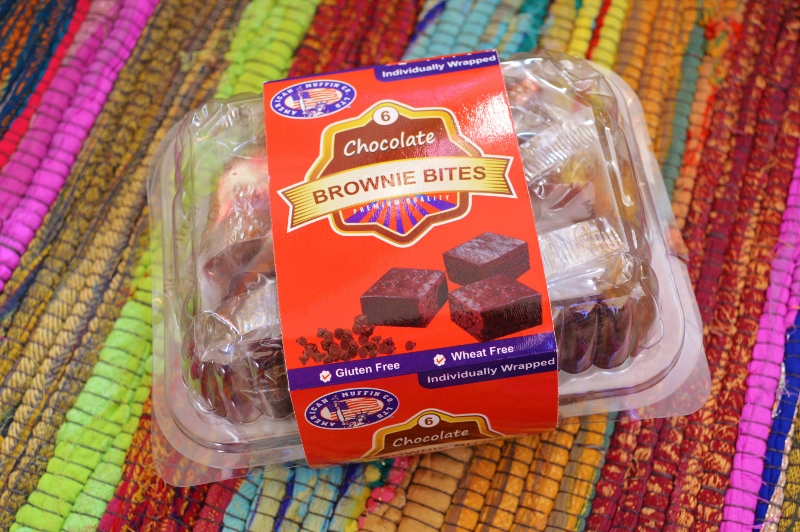 American Muffin Company has created a range of gluten-free cakes and brownies, and I was lucky enough to receive the exact item I would have chosen in store – the brownies. The tub contains six individually wrapped brownies, and though the texture is more cake than brownie, they are incredibly yummy. The cake is thick and moist, and the cocoa and chocolate used is very rich, which gives them a high quality flavour. Perfect as an afternoon treat with a cup of tea! 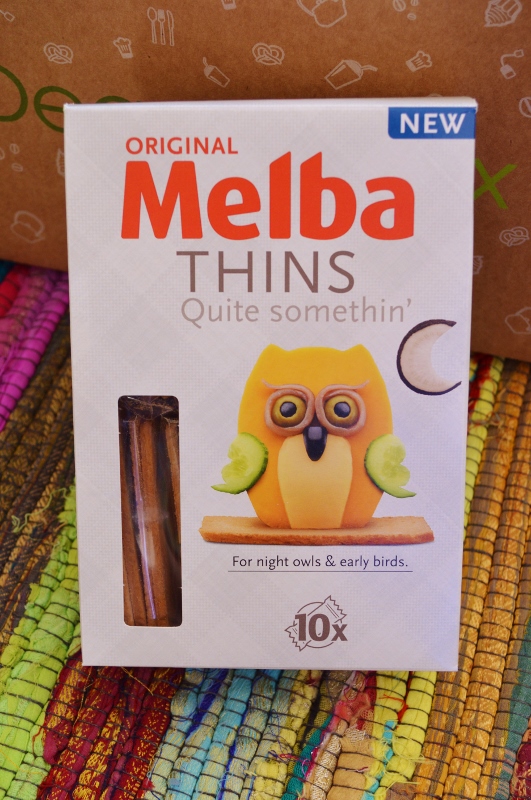 Melba Thins aren’t the most exciting snack in the world, but they are versatile, and work well with a variety of toppings.  As the box says, they’re great for ‘night owls & early birds’.  For an evening snack they’re fab with cheeses and pickles, and for breakfast or brunch they’re lovely with sweet spreads, such as jam or chocolate spread.  I like the fact that the thins in this pack come in generously portioned individual packets, as they can also be taken in lunch boxes to work.

If you fancy giving Degustabox a go yourself, you can get a £3 discount by entering code 2S7LB at the checkout.  You can also follow Degustabox on Twitter and Facebook for more exclusive offers.

*This Degustabox was sent to me for review purposes.  All opinions expressed are honest and my own.*